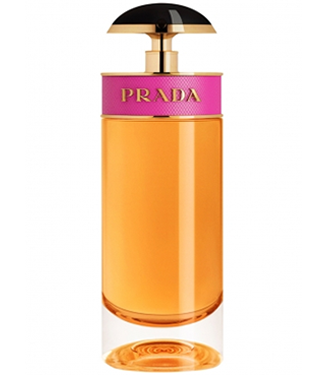 This is ultimately too sweet, too syrupy, and too “aged boudoir”—in that specific order. I thoroughly enjoyed (and even veered into loving) the dry down, but its opening is much like an indulged ballerina with candy bar in hand—careening at 75 miles per hour, spinning out of control until extreme physical exhaustion causes her to slump over—a mess of tulle, powder, and lace strewn about violently, a vestige of her hysterical episode.
This is not to say that Prada’s interpretation of plastic doll head is a bad one, in fact I can understand the mass appeal; the issue is with how this fragrance counteracts with my chemistry. It just won’t work, I feel like I should be getting a sugar high just wearing it.

Initial notes are a syrupy caramel followed by pink powder and musky vanilla. It then transitions into a potpourri of chemically induced candy and warm benzoin which smells very “matronly” to my nose, like an older woman who wears too much jewelry and applies her makeup with a spackle knife.

Some time later the scent becomes a bit more agreeable, the caramel is properly tamed and the powdery notes are free to reign with benzoin and vanilla hand in hand to celebrate the complete overthrowing of that wretched synthetic candy. This is the part which I have tried to love, but overall the journey has been marred with too many unfortunate memories.

I’ve had an unharmonious affair with Candy which—with the passage of time, has softened into an affable relationship at best. For some reason I have owned 5 bottles of this perfume in the past year, all were gifts of some sort, it’s like a cruel joke the world wants to impose upon me.  Either way I refuse this affair, there are other fish in the perfumed sea ♥.